Burned out gascarrier at Hitachi shipyard 1988 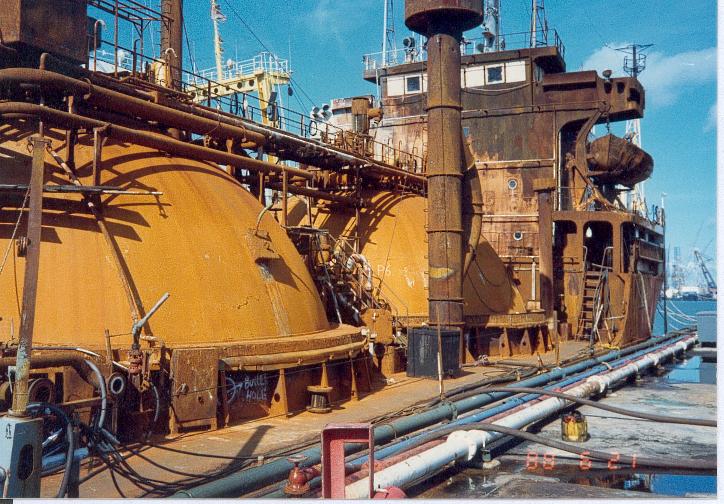 Boiler explosion (in france). The vessel Aiman being repaired at S.pore 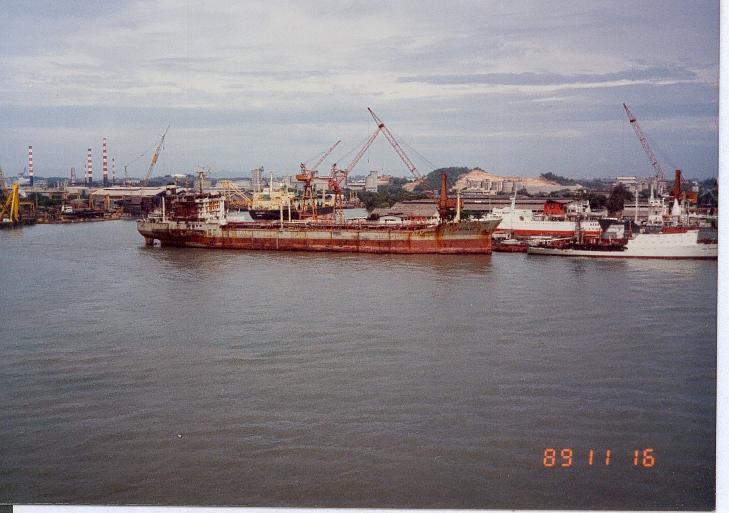 Took the following pictures during my stay at Hitachi shipyard Singapore March 1993.

M/T Maersk Navigator burned out after collision with the M/T Sanko Hope. 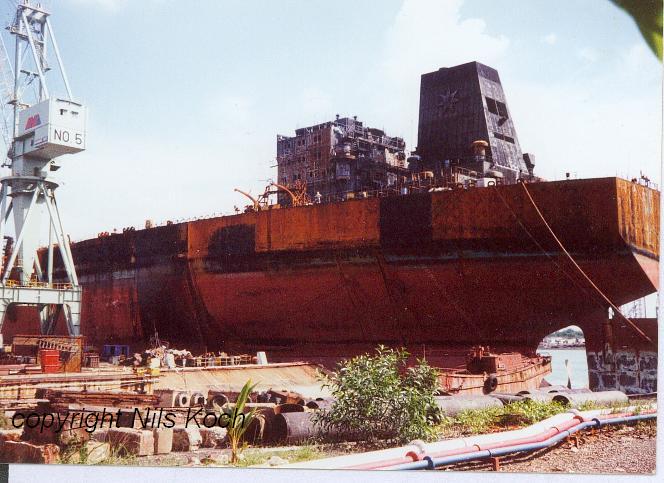 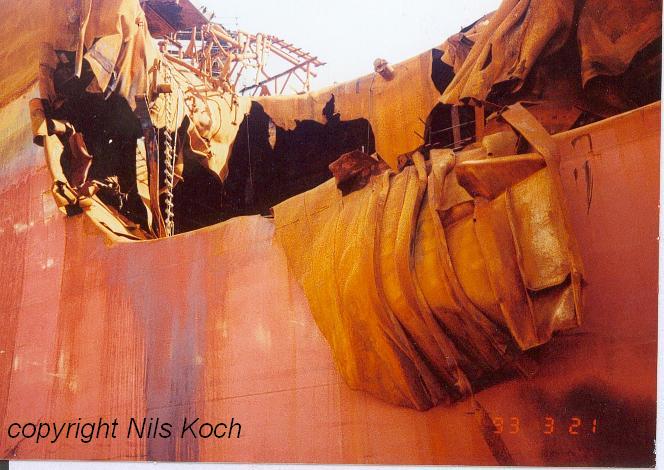 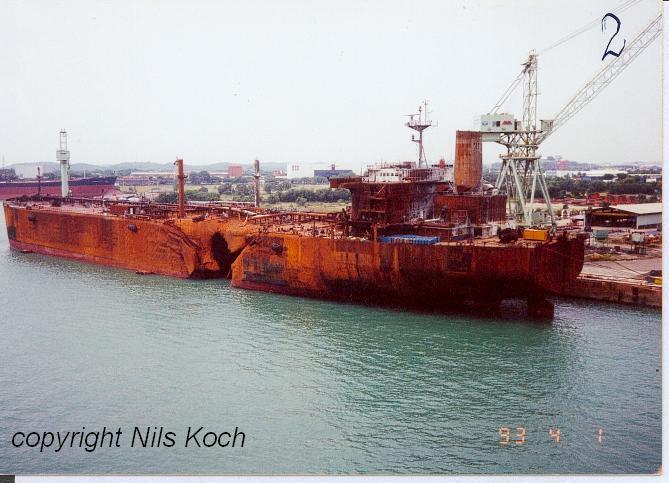 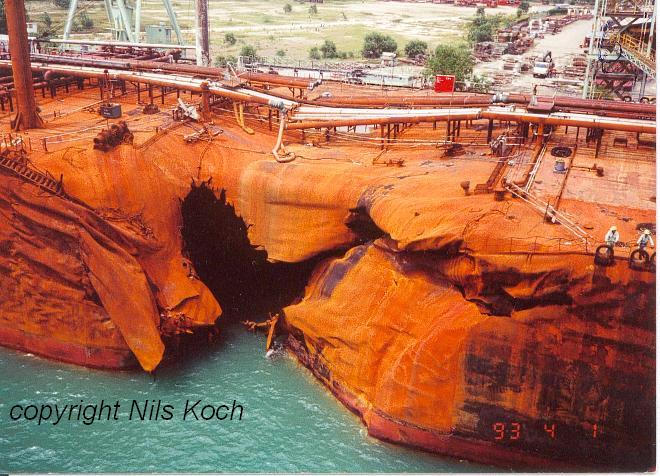 The remains of the port lifeboat can be seen under the davits. The starboard lifeboat was launched but never found 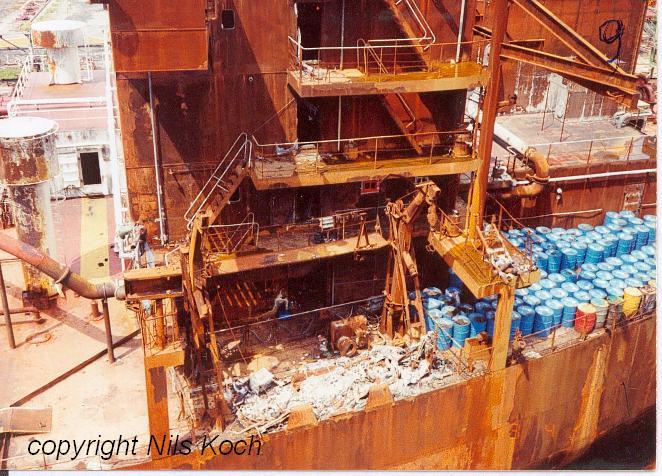 Nagasaki Spirit collided with a rogue ship, the Ocean Blessing, which was zigzagging through shipping lanes at the northern end of the Straits of Malacca and possibly under pirate control. The accident [sic] killed all the crew aboard the Ocean Blessing and all but two of the tanker's crew.

On the calm clear night of 19 Sep 1992, the 100,000 ton crude carrier Nagasaki Spirit collided with the 27,000 ton container vessel Ocean Blessing. The collision occurred just before midnight at the northern entrance to the Malacca Straits. It was a classic T-Bone collision in which the Ocean Blessing is believed to have been making 21 knots based on the engine room log repeater found in the aftermath, and the V-shaped ripping in the side of the Nagasaki Spirit. A massive fire ensued and at least 12,000 tonnes of crude oil spilled out into the Straits. 44 sailors did not survive to tell the tale of what happened before the collision. The final message of the captain of the Nagasak Spirit however leaves little doubt. Have been fired upon and now have fire in Nos 5 and 6 and central tanks. Abandoning vessel immediately and into two 16 man life rafts and will activate EPIRB in lat 04.33N, long 98.43E at 1623 GMT Sep 19. No time to report further as abandoning vessel No lifeboats were ever found, onboard the Ocean Blessing investigators found only small piles of ashes --- the remnants of human remains, and no remains were found on board the Nagasaki Spirit.

Speculation has it that the Nagasaki Spirit was taken by pirates, and the Ocean Blessing had also been pirated, or was trying to avoid the same, as she was observed by another ship "to move in an erratic manner --- changing speeds from 10 to 20 knots, from side to side, as though the deck watch officer was trying to employ evasive maneuevers to avoid being boarded by pirates".

The remains of the port lifeboat can be seen under the davits. The starboard lifeboat was launched but never found. Only two crew members of the Nagasaki Spirit survived, the 3rd Engineer and the 2nd cook. The Nagasaki Spirit Master's dead body was picked up from the sea by an American helicopter and landed on another TK vessel the Mihara Spirit. None of the other crew member was found. The Nagasaki Spirit was repaired and renamed Neptune Leo. All the crew members of the M/S Ocean Blessing were found dead onboard the vessel and there were rumours that there were more bodies found onboard than stated in the crew list.

There's a great deal of mystery surrounding this collision at the northern end of the Malacca Strait. Other sources including Discovery Channel claim the Captain of the Nagasaki Spirit was kidnapped and the ship put on autopilot. But CTX has communicated directly with the Captain's daughter. His body was brought home and identified by a local doctor.

The purported last message from the Nagasaki Spirit is certainly not verbatim. No tanker master would refer to his tanks in this manner.

Another puzzling point is that this casualty resulted in a important salvage claim dispute which went all all the way to the House of Lords. But in their judgement, quoted above, there is no mention of piracy. The judgement does say that all the crew of the Blessing lost their lives and only two members of the Nagasaki Spirit survived. If the Blessing's crew were not locked up, then most of them should have survived as the fire on their ship would have started in the bow. Similarly, Teekay in discussing the casualty in their annual reports makes no mention of piracy,

CTX feels the best source is Koch, a TK master, who was at the Hitachi yard in Singapore in 1993 when Nagasaki Spirit was towed in. He is quoted verbatim in the entry above. His photos show the penetration on the port side forward of the accommodation. Its more than a third away thru the ship. The angle looks nearly 90 degrees. The port life boat is completely burned. But the pictures also indicate show little fire damage on the starboard side of the accommodation. The key is Koch's statement The starboard lifeboat was launched but never found .

TK's crews are among the best in the tanker industry. Lifeboats launched by good crews in calm conditions in a busy shipping lane do not disappear. CTX's best guess is that the pirates attacked the Ocean Blessing first. The crew was killed or locked up. Their ship was not under control, clobbered the Nagasaki Spirit, and started the fire. But on the Spirit, thanks to inerting, the fire was confined to the port side aft. The crew of the Nagasaki Spirit abandoned ship in the starboard life boat, and were then killed for their wallets and watches, probably by the same pirates that took the Ocean Blessing.

The crew on the Blessing could not fight the fire which eventually gutted the whole ship and killed anyone who was still alive.

At this point this is hopefully informed conjecture. We need to talk to TK, and maybe the two survivors. The crew of the USN ship (maybe Beufort) and others must have info on how the recovered bodies died.

Estimates of the fatalities are all over the place, but it is pretty clear that all but 2 people of two crews were killed. One source says 51 total killed which seems about right. The crew of a Teekay Aframax would be about 28 and CTX is guess that the crew of a small container ship would be about 25.

Video taken from USN ship, late in afternoon. So must have been about 18 hours after collision. The two ships are drifting about 2 miles apart. The weather is clear and dead calm. Blessing is completely gutted, but fire on Nagaski Spirit is mostly confined to port side aft.

A commentator with the handle of terrible One claims you can see we were the only ship there, we got these as it was getting dark, we pulled no survivors from the ship. We did however pull numerous bodies from the water. All of them had extreme lacerations on their wrist and butts from fisherman that arrived on the scene first. They were going for their wallets and watches. Makes no mention of burn injuries, but does not say what killed them.

In Sep 92, when the tanker Nagasaki Spirit carrying Gulf oil was proceeding on a southerly course in the Malacca Strait, she was boarded by pirates. The ship was looted and the crew thrown overboard. Coming up on the opposite course at the time was the container vessel Ocean Blessing. She too met with the same fate but with the exception some of the crew were locked up in a hold. Thus both vessels were NUC and heading toward each other. The inevitable collision occurred. The Ocean Blessing tore into the tanker's midships. Uncontrollable fire resulted. The Nagasaki Spirit become a charred hulk and sank. The Blessing was badly damaged through explosions. Investigations revealed this ship was carrying dangerous cargo in diplomatic cargo containers consisting of illegal Chinese arms, ammunition and explosives meant for Mid East.

Only two crewmembers of the Nagasaki Spirit survived, the 3rd Engineer and the 2nd Cook.

another TEEKAY vessel the M/T Mihara Spirit.  None of the other crew member was found.

The Nagasaki Spirit was repaired and renamed Neptune Leo.

All the crew members of the M/S Ocean Blessing were found dead onboard the vessel ,

and there were rumours that there were more bodies found onboard than stated on the crew list.

See Clip from You tube of the accident     http://www.youtube.com/watch?v=9syWzmOkg5U

M/T Seawise Giant at Singapore. She was hit by Iriaqi Exocet during the Iran- Irak war. The vessel was repaired

and is still in service. 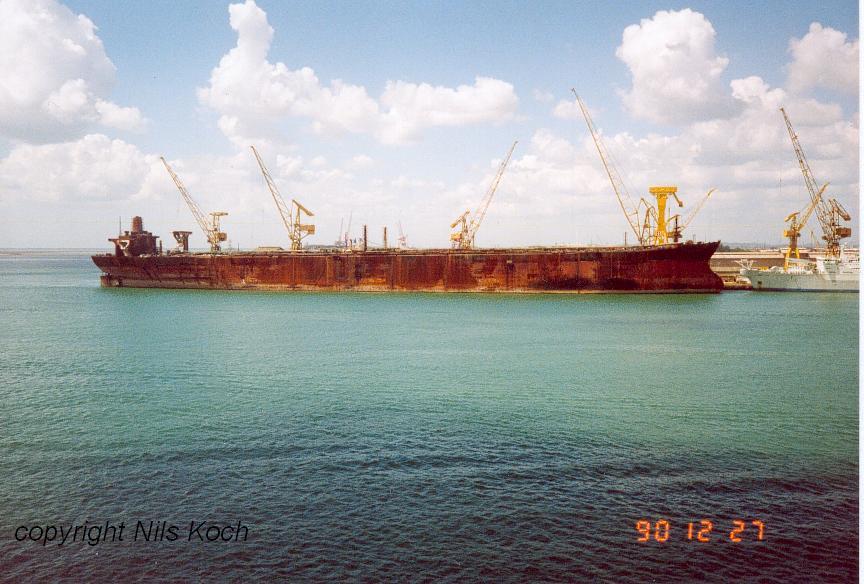 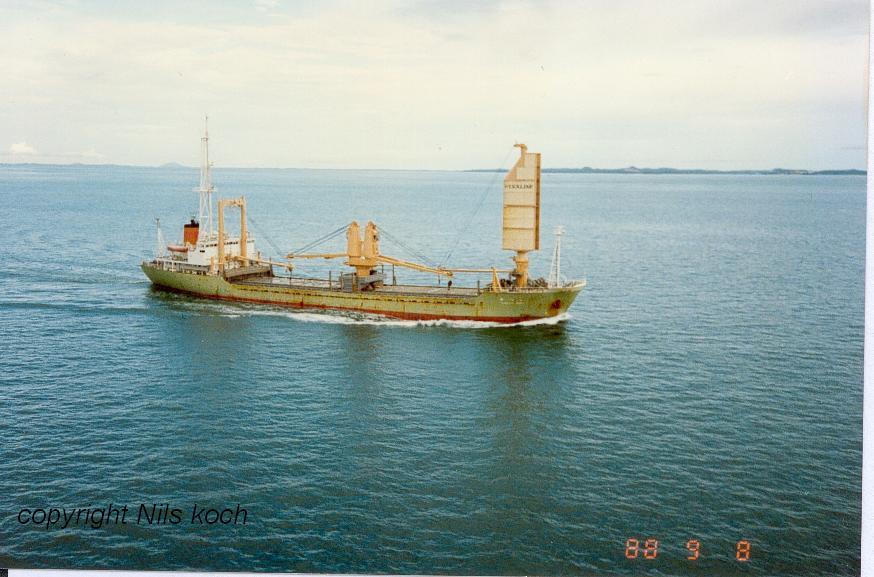 Passenger vessel JARL at berth i Kalmar, She was built 1911 in Germany. I spent many summers on her both as Mate and Master. 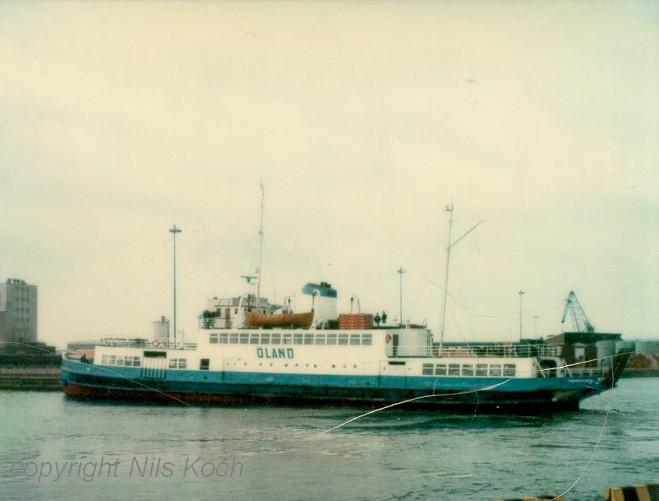 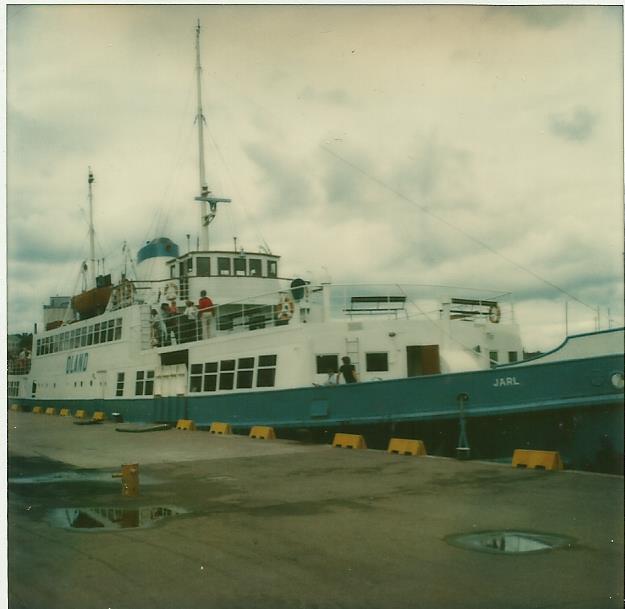 As floating restaurant in Helsinki 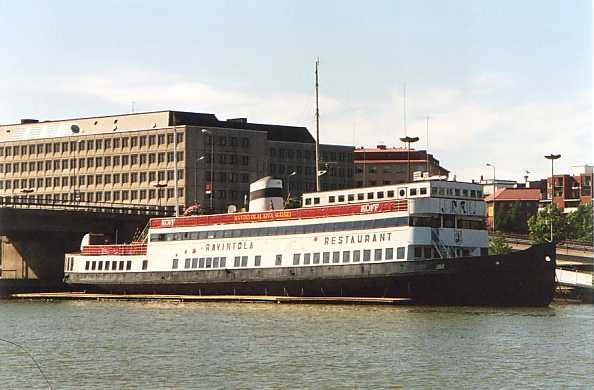 The British royal yacht Britannia overtaking me in the Singapore strait. The Queen was onboard at the time. She was escorted

by a Malaysian warship. I left the eastern anchorage 0600 hrs in the morning with the M/T KOYO SPIRIT, Britannia weighed her

anchor shortly after and came after me out in the channel. 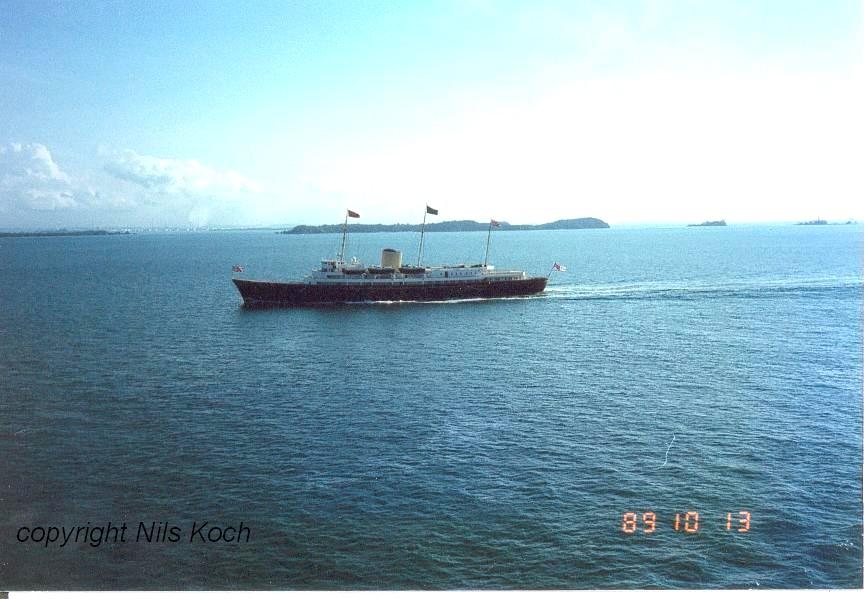 Torben Karlshöj the owner of my ship was watching us leaving the anchorage, he was anchored close to us on his yacht the KISUCA . 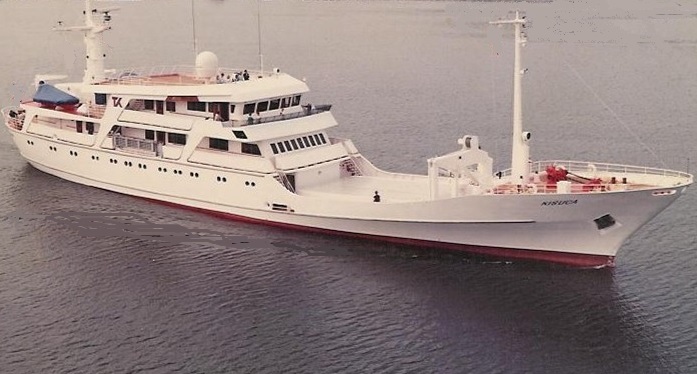